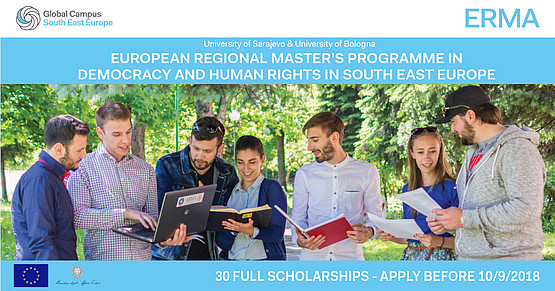 The European Regional Master's Programme in Democracy and Human Rights in South East Europe (ERMA) is a one year, full time, interdisciplinary programme. It is a joint initiative by the University of Sarajevo, Center for Interdisciplinary Studies (CIS) and the University of Bologna. ERMA is co-financed by the European Union through the European Inter-University Centre for Human Rights and Democratization (EIUC) and the Ministry of Foreign Affairs of Italy via the Embassy of the Republic of Italy to Bosnia and Herzegovina. It is implemented in Sarajevo and Bologna, thus students receive diplomas from both universities (UNSA and UNIBO). The programme awards 60 ECTS.

The Master programme promotes the development and realization of young professionals for state management, inter-governmental and non-governmental organizations, for academia and think tanks in Albania, Bosnia and Herzegovina, Kosovo, Macedonia, Montenegro and Serbia, as well as countries belonging to the EU, the rest of Europe, and worldwide.

ERMA is part of the EU's Global Campus of Human Rights, a unique network of more than one hundred participating universities around the world, seeking to advance human rights and democracy through regional and global cooperation for education and research. This global network is promoted through ERMA and six other Regional programmes, which are based in Venice for Europe, in Yerevan for the Caucasus, in Pretoria for Africa, in Bangkok for Asia-Pacific, in Buenos Aires for Latin America and the Caribbean, and in Beirut for the Arab World.

The following universities coordinate the Master's Programme, and confer a double degree:

The academic consortium is composed of the following universities: