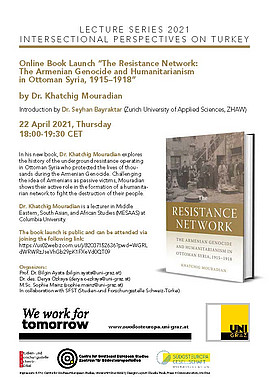 “The Resistance Network: The Armenian Genocide and Humanitarianism in Ottoman Syria, 1915–1918”

The Resistance Network presents a social history of the Armenian Genocide exploring an underground network of unarmed resistance that helped to save countless lives in wartime Aleppo under the Ottoman Empire. Mouradian provides an alternative perspective challenging portrayals of Armenians as passive victims of violence and subjects of humanitarianism and focuses on their efforts for resistance through exploring hundreds of missionary records, accounts, and official documents.

Dr. Khatchig Mouradian is a lecturer in Middle Eastern, South Asian, and African Studies (MESAAS) at Columbia University. In January 2021, Mouradian was appointed Armenian and Georgian Area Specialist in the African and Middle Eastern Division (Near East Section) at the Library of Congress. He has published articles on concentration camps, unarmed resistance, the aftermath of mass violence, midwifery in the Middle East, and approaches to teaching history.

This lecture is public and can be attended via joining the following link: